It's been more than one year without update. Not that the project stopped. Not that progress was slow. After the release, it was time to re-think things. Super Tilt Bro. version 1.1 pushes its engine beyond known limits. Big changes had to be done. Someone had to adventure in the deepness of the most obscure code, and rework everything!

Now the game's engine is shiny, it works like a charm and suffers none of its predecessor's shortcomings. We can think of having more than one character, going out of screen without glitches, adding contents without breaking things, and basically any awesomeness that comes to mind! So, it is basically a new game. A game named Super Tilt Bro. version 2 (smart, isn't it?)

It is a new game, so it begins a new cycle of ALPHAs, BETAs and releases. For Super Tilt Bro., an ALPHA means some major features are missing: the game is enjoyable, but keep an eye on updates, they can change everything. Once all major features are implemented, it is time for BETAs. A BETA typically adds content, polish and maybe new mechanics: the game stays the same, but better and better. Finally, the release is what should be the latest version ... Until some new idea require deep changes to the code base.

So, here is the changelog for Super Tilt Bro. version 2.ALPHA-1! 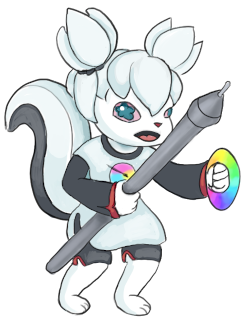 Kiki carries a big brush, allowing her to draw platforms and walls at will. She can use this ability to avoid falling from the stage, or more creatively to block her opponent. The brush is big enough to strike through painted platforms, allowing her to capitalize on an opponent surprised by the fresh wall she just painted.

Kiki is slower than Sinbad, so she has a bad time trying to approach him upfront. She shines in a more defensive gameplay, capitalizing on her opponent's errors.

Stages backgrounds have been re-imagined by Martin Le Borgne. No more word needed, watch pictures instead.

Characters can go slightly out of screen without losing their lives. It seems natural, but was actually one big change to the engine which handled only one screen.

A quick tap on down button makes your character fall from thin platforms.

Recovery moves are easier to input correctly. Example: holding "left, up and B" now performs the same action as just "up and B": Sinbad's triple jump.

It is harder to get the bot stuck, endlessly repeating the same move. It is now able to strike you even if you don't move!

If you are one of those who said the game is too easy: go fight against Kiki bot in hard mode ;)

Title screen's logo is bigger and animated. Transition between menus is speeder than before.

Super Tilt Bro. version 1's game engine was developed alongside the game. At that time, the scope was not so ambitious, so it just does the basics, just good enough for things to work. As the game grown, it caused severe limitations.

The engine is reworked to remove these limitations. It is now a separate project, so it is not tide to the game, it handles scenes larger than one screen, and it processes animations at low CPU cost among other things.

Basically, now the engine is an ally where time made it an enemy. There is no big structural change, but little things everywhere to make it more flexible.

Finally, after years of being limited to a one-character roster, we can add more.

The game is still named Super Tilt Bro. (notice the singular), we will need to find a good justification for that ...

A mod is a collection of JSON files to describe characters and GIFs for graphics. At build time, a specific mod-compiler runs to munch all that and output assembly code. It is super useful to bootstrap the creation of a character since very little code is needed to get a feel of the gameplay. Also, characters can be graphically created in The Gimp, using a very specific layout of layers and exporting it to a character mod.

While it should feel the same, the HTML emulator got quite an update.

First, it is no more powered by asm.js. The idea of a bytecode compatible with Javascript is incredibly cool, but let's be honest and accept that it is surpassed in everything by WebAssembly.

It is still based on the em-fceux project, but rebased on a newer version: 0.5.0 (released in 2020) instead of 0.3.6 (released in 2016.) Along with improvements in em-fceux itself, it also brings support for recent Emscripten which is capable of compiling with full optimizations that were buggy in previous versions.

Better bytecode, better codebase, better optimizations. It should be faster than ever!

Some subjects that are just touched here have their full article if you are curious:

What to expect in the future?

Note that this is just a list of what could be nice to have. It is subject to change, and anyway will take time to implement. Everything is possible, but good things take time to cook.

Internet on the NES? It is possible, "just put a wifi chip in the cartridge." In all seriousness, that's a big subject. It progresses slowly, but steadily and is now one of the major goal of Super Tilt Bro.

Adding something more fun for solo players than fighting a bot.

Not only the current ones are ugly, they allow only for one game mode. With online duels, and solo mode, it will have to be reworked.

Currently, only characters and graphics are moddable. Stages are the next target.

With bigger cartridges, we can store more music. The audio engine could use a little rework, then there is "just to compose the new tracks."

Working in assembly is too hard, there is JSON game mods. Editing JSON files is too painful, there is The Gimp exports. The Gimp is not an optimal character editor, let's create one! (When will it stop?)