Betas are over. Now is the great stuff!

After more than two years working on this project, it surpassed all my expectations. It was an experiment, it became a prototype, it imposed itself as a pet-project, but today we can call it a new way: it is a game!

The jab as a new animation. More than just a visual upgrade, it slightly changes its use. The new animation as more end-lag, but can be cut to start a new jab. With this change, we still can chain jabs, but can also be punished as we have to wait before doing something else.

The aerial-down attack has been accelerated and cancels fast-fall. It is now possible to use it during a short-hop, which can be deadly.

Air friction is now here. It progressively slows you down while mid-air. Implementing this mechanic means strong moves can be stronger without being insta-kills. It is always fun to deliver overpowered slaps!

By pressing down just before hitting the ground, you can recover instead of crash. It is not a new mechanic, but now it is easier to input as the timing is more permissive.

Pressing select no more regenerate your shield. Don’t be so apprehensive, go out of that shield and fight!

The visual glitch at the end of stage selection is no more. The transition to the stage is now super smooth.

The visual glitch between menus (only on specific hardware) also disappeared.

The parsing and manipulation of game’s animations with the stblib is now super easy.

Formerly we could only build the game as a ROM file for emulators. It is nice, but now we can also build raw data to be flashed on an actual cartridge. It means that it is easier than ever to build Super Tilt Bro. to be played on an actual NES. 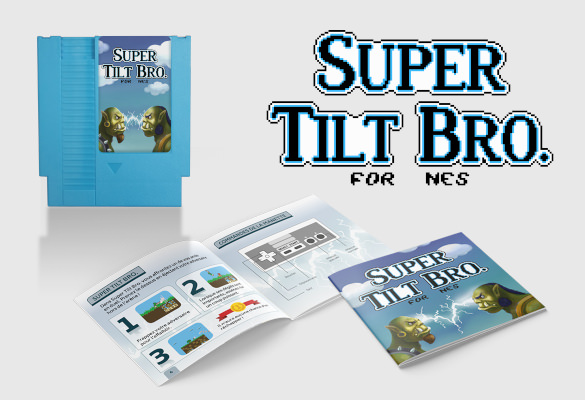 What else? Would it really be a NES game without a physical edition? Actually a first batch of nine cartridges has already been produced. But, alas, there is not enough for everybody, so I plan to do a second batch, targeting December.

It is a really big work. As Super Tilt Bro. started with humble goals, it comes to a point where its engine cannot do a lot more. So, the idea is to rework the engine, remake the game and to push it over its current limits. Some crazy ideas that may be added are: 4-players, multiple characters, alternative game modes,... Actually, anything.

Thank you for reading this entry, reading this devlog or playing the game. It was a long journey, going from zero, building a game. From the bottom of my heart, thank you to anyone that at any point cared a little.